Elkhorn Coral – the iconic coral species! Elkhorn(Acropora palmata) is one of the most iconic coral species of Florida and the Caribbean. Its beauty and distinct look make it a joy to photograph, and one of the most recognized and celebrated corals in this region. As its name suggests, it looks similar to the horns of an Elk, with flattened brown/orange branches that grow outward from a sturdy base. These branches spread out and up in order to catch sunlight which it can transfer into energy. As such, Elkhorn thrives in shallow clear water of around 12 feet where it can get plenty of sunshine. 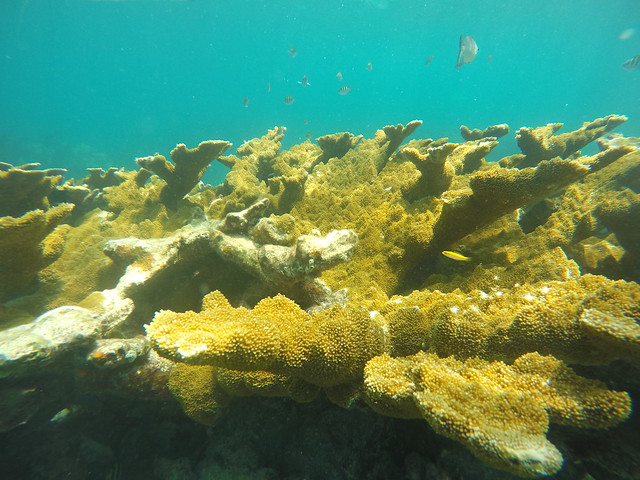 Why is Elkhorn Coral so important?

Elkhorn has a crucial role to play in our Florida Keys reefs, as many fish and marine creatures love to hide under its large branches. These branches are also very good at minimizing wave action. We can see this very clearly at some of our sites! When we go to our dry rocks site, we will moor the boat so that we go snorkeling right behind the coral barrier, where the water is nice and calm. If you look out right before this coral barrier, you can see that the ocean waves are significantly larger. A lot of this wave energy dissipates as it travels though the coral – especially the large branches of the Elkhorn. This can really make a big difference when large storms come through! During these storms, both coral and mangroves are vital to protecting our coastlines and our beloved Florida Keys.

What can we do to protect Elkhorn Coral?

In the last 30 years, coral populations have dropped significantly worldwide, and Elkhorn Coral is now classified as a critically endangered. As these corals are so important for us here, the Keys community is working hard to protect and restore them. As boaters, divers and snorkelers, we like to use the mooring balls instead of anchoring on or near the reef, and we try to keep good buoyancy control so we don’t accidentally touch or bump into the coral.

How about restoring our reef?

The Coral Restoration Foundation and Mote Marine Laboratory actively trying to restore our coral. They grow Elkhorn coral, among other coral species, in large coral nurseries, and then outplant them back onto the reef! Elkhorn coral is one of the fastest growing species of coral. What is amazing is that when the Elkhorn coral is growing in the nurseries, it grows even faster than it would in the wild! This is because these coral are getting special attention and growing in ideal conditions. For example, divers will spend time in the coral nurseries clearing competing algae away from the growing coral. Hopefully, with this rapid growth, and our continued protection, we’ll see more and more Elkhorn colonies on our dives!

Come see some Elkhorn colonies with us!

If you want to know more about Elkhorn, or perhaps photograph this beautiful coral, come on down to our shop! We’ll take you to some of the best sites where you can still see this majestic coral in the wild!

If you think that our photo guided tours for scuba diving, PADI Scuba Instruction and snorkeling look really cool and you are ready to give it a try, sign up now.

For the Discover Scuba Diving: No experience necessary.
We at Sail Fish Scuba just love helping everyone have the best possible dive or snorkel tour every single day of the year! What are you waiting for? Sign up right now to join the fun PADI crew of Sail Fish Scuba for the adventure of your lifetime.

Where to go for Lunch/Dinner after your tour

Check out these coupons for local restaurants. Show the virtual coupon upon your arrival at each restaurant to get the great discounts. https://sailfishscuba.com/key-largo-information/coupons/

Any cancellations more than 48 hours before scheduled check-in time will have payments refunded.